This summer, during the FIFA World Cup, I went with some friends to watch a soccer game at the house in Turin of the Italian philosopher and former member of the EU parliament Gianni Vattimo. As soon as our team began to lose, Vattimo said: ‘Oh, by the way, I forgot to tell you, the pope called me yesterday.’ 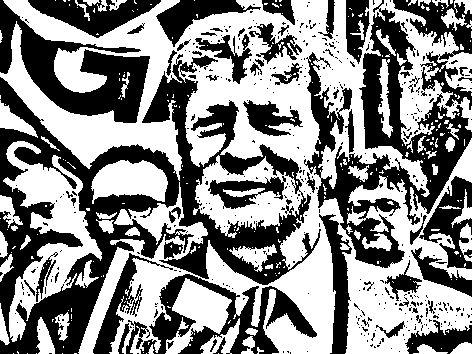 Gianni Vattimo from a photo by Giovanni Dall’Orto, taken at the Gay Pride in Como (1999) | Feral Philosophy

We knew that Vattimo and the man born Jorge Mario Bergoglio in Argentina have many friends in common; they were even supposed to be on the same panel at a conference when Bergoglio was elected to the papacy in March 2013. And the two recently met in Rome. But the news distracted us from the game, to say the least. This is something that one might imagine taking place in a TV drama such as The Young Pope (2016), but instead it was in the living room of one of the world’s most important living philosophers.

Oh, by the way, I forgot to tell you, the pope called me yesterday.

But why did the supreme pontiff of the Roman Catholic Church, though he was certainly rooting for the same team, call up the father of ‘il pensiero debole’ (weak thought), a philosophical stance centred on weakening political and religious dogmatism, an urgent matter in the 21st century?

A few days before the game, the Argentine anthropologist Luis Liberman, a mutual friend, had brought the pope a copy of Vattimo’s new book, Essere e dintorni (2018) or ‘Being and Surroundings’. So Pope Francis decided to call to congratulate Vattimo. Without diminishing the significance of other surprising calls made by Francis – to survivors of sexual abuse, to writers critical of his pontificate, or to astronauts in space – there is more to this particular phone call than the appreciation of a book that just mentions him in passing during its examination of contemporary philosophical problems related to such dark thinkers as Friedrich Nietzsche and Martin Heidegger.

… why did the supreme pontiff of the Roman Catholic Church … call up the father of ‘il pensiero debole’ (weak thought), a philosophical stance centred on weakening political and religious dogmatism … ?

Beside the interest both men share in the reformation of the Church and alarm over capitalism’s destructive forces, there is a particular attitude toward religion that unites them. This attitude is evident in the philosopher’s interpretation, and the first Jesuit pope’s practice, of Christianity.

Although Vattimo has been a supporter of Francis since his election, his particular interpretation of religion goes back to the 1990s, when Vattimo began to apply his philosophy to the possibility of a ‘nonreligious Christianity’. This expression refers to a faith without foundations, that is, free of the power-laden relation with God that traditional theology always imposed upon believers through the Church.

Vattimo justifies this interpretation through the biblical concept of kenosis (the self-emptying, incarnation, or weakening of God), and he uses this concept to dismiss the Church’s eternal connection of God with Truth. This association is at the origin of the ecclesiastical establishment’s conservative stance toward matters concerning gender, sexuality and procreation. Against this association, Vattimo calls for a nonreligious Christianity, where the pope and the Church substitute charity for truth.

The weakening of divine transcendence and sovereignty – which are figures of violence for the Italian philosopher – leads to softening the faith and encouraging believers to doubt the authority of sacred texts, the Church and, most of all, the pope. But when Francis responds to questions about ‘gay believers’ with a simple ‘Who am I to judge?’ or agrees that ‘there must be more’ women in key roles in the governing body of the Church, he is inviting us not only to doubt these principles but also to change our attitude toward religion.

This attitude is not meant to doubt the existence of God but rather to recall, as Francis wrote in Rejoice and Be Glad (2018), how ‘Christianity is meant above all to be put into practice’. This practice is manifest both in his small gestures when he carries his own bags on planes and his big plans for a decentralised Church where environmentalism is at the forefront of the faith’s mission. But why has this softer attitude toward believers and nonbelievers from all over the world infuriated conservatives to the point of waging a war against him within the Church?

It should come as no surprise that Vattimo and Francis share similar enemies: ecclesiastical intellectuals and conservative cardinals. Their call for a different attitude and practice of Christianity does not undermine theological discussions over the existence of God as much as it undermines the excuse those intellectuals and cardinals rely on to preach on abortion, homosexuality or morality.

Christianity is meant above all to be put into practice.

Despite these enemies, when Francis began to reorient the Church toward climate change, financial reform and charitable refugee policies, he became, as Vattimo pointed out, ‘one of those rare figures in the world, perhaps the only one, capable of guiding a radical transformation of the social and economic order’. Although Vattimo does not pretend that Francis will become the chief of a communist movement, considering that he is tied to the faith’s orthodoxy, he seems to be the only world figure today capable of confronting the various Right-wing populists emerging to impose nationalist and xenophobic policies.

It is difficult to imagine that the spiritual leader of more than a billion Roman Catholics did not know that a renowned gay, communist philosopher had been supporting his pontificate over the years. His calling Vattimo wasn’t meant to thank him for his support or for providing philosophical justifications of his humble religious attitude. Rather, it was another measure meant to continue the weakening of those religious, political and cultural dogmas that are so vital to his enemies.

Santiago Zabala is an ICREA (the Catalan Institution for Research and Advanced Studies) research professor of philosophy at Pompeu Fabra University in Barcelona in Spain. His writing has appeared in The New York Times, Al Jazeera, the Los Angeles Review of Books, among others. His most recent book is Why Only Art Can Save Us (2017).

This article was originally published at Aeon and has been republished under Creative Commons.