An Alphabet of Celebrities

In 1899, an English-American writer and illustrator by the name of Oliver Herford published an irreverent book of famous men and women with the title, An Alphabet of Celebrities.

When it was printed, most of the historical, mythological and literary “celebrities” depicted in the book were already dead. Yet, they were still famous enough at the time to require little introduction. Some, like Dante, Darwin and Cleopatra are still one-name superstars. Others, like Victorien Sardou, are almost entirely forgotten.

Leafing through this old A-to-Z of celebrities is like finding a Mad Magazine for the nineteenth century. The book’s lyrics and images wondrously lampoon the– mostly– old men of European civilization. Instead of being revered as timeless sages, they are brought low, returned to us as fallen flesh-and-blood creatures. Their everyday lives get the tabloid treatment. And, just like today, the common sin that most often brings these high-and-mighty minds crashing down to earth is lust.

And, just like today, the common sin that most often brings these high-and-mighty minds crashing down to earth is lust.

For example, the book depicts Aphrodite sipping tea with a lecherous King Arthur; Martin Luther and Franz List ogling the dancer Loie Fuller while ignoring the writer La Fontaine; and Socrates, and some other eggheads gawking and gossiping in front of a monkey at the zoo. The book gives the elites of educated civilization a democratic dressing down.

Each image is paired with a short rhyme that adds to the satire. The pedestrian poem in letter ‘I’ is typical of the book’s low-brow humor:

I is for Ibsen, reciting a play
While Irving and Ingersoll hasten away.

An Alphabet of Celebrities depicts the greats of the past as all belonging to the leisure society at the end of the Victorian era. Mixing together centuries and continents, the woodcuts display Greek gods, English kings, French philosophers, Italian poets and Swedish writers playing cards, drinking tea, attending the theater, getting dressed and fleeing danger. While the images satirize the celebrities, they also humanize them– and unafraid of anachronism, they blast the past into the present.

Refined readers may think that the animal natures and mundane daily lives of the great minds and entertainers of the past are beneath notice. Perhaps, to these readers, this book is only ephemera, best forgotten and recycled into the rubbish heap of history. The genius of Socrates and company, so such thinking goes, elevates them above us– and above this silly book.

Herford and Small, Maynard & Company disagreed and so do I. The Latin motto of the Boston publishers of An Alphabet of Celebrities is “Scire Quod Sciendum,” which translates as “knowledge which is worth having.” It’s a pretentious motto for an unpretentious book. Yet, I agree with Herford & Co. that, lest they become dry as dust, we should satirize the greats of our past, and understand that, like us, they were often lustful, bored, pompous, sad and fearful.

– Knowledge which is worth having

In the letter ‘A’, Edward VII, who gave his name to the Edwardian Era, is in the foreground sipping tea around a table with a stern King Arthur, a self satisfied Alcibiades and attractive Aphrodite, the Greek goddess of love. All three men are charmed, in their own way, by the beautiful goddess.

A’s Albert Edward, well meaning but flighty,
Who invited King Arthur, the blameless and mighty,
To meet Alcibiades and Aphrodite.

In ‘B’ Actress Sarah Bernhardt is seen performing on stage for a bored audience consisting of Chancellor of the German Empire Otto von Bismark, the notorious prisoner from the gospels Barabbas, and the natural philosopher Francis Bacon.

B is for Bernhardt, who fails to awaken
Much feeling in Bismark, Barabbas, and Bacon.

‘C’: Historical and biblical figures are gathered around a table where Christopher Columbus tried to make an egg stand on its tip—and failed, as the egg can be seen lying broken. Thomas Carlyle, the Scottish essayist, philosopher, and historian is holding hands with a dramatically younger Cleopatra. While the Chinese sage Confucius looks unimpressed and disdainful, Cain looks uninterested and dejected.

C is Columbus, who tries to explain
How to balance an egg—to the utter disdain
Of Confucius, Carlyle, Cleopatra, and Cain.

‘D’: Three old men, Diogenes the ancient Greek philosopher, Charles Darwin and Dante sit in the front row of a theater applauding a young woman dancing on the stage.

D’s for Diogenes, Darwin and Dante,
Who delight in the dance
Of a Darling Bacchante. 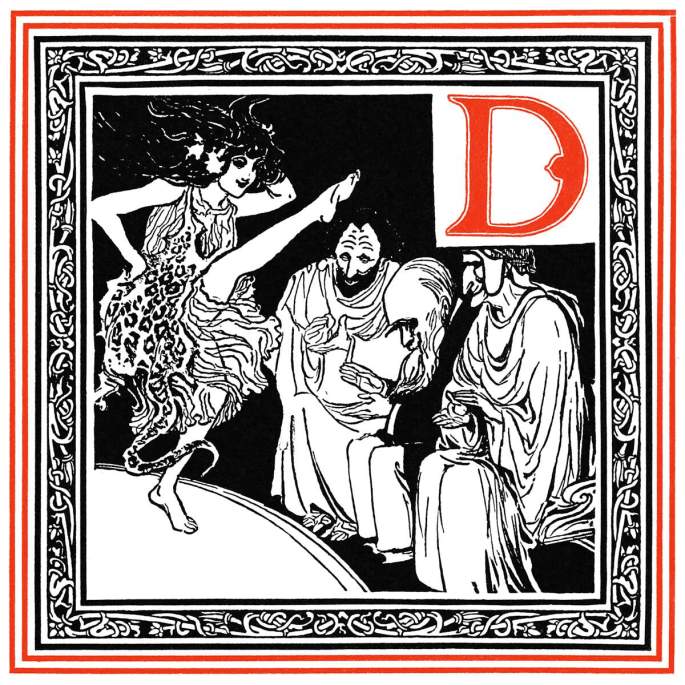 ‘I’: With disheveled hair and sideburns, Henrik Ibsen reads from his notes with dramatic flair, unaware that the only two people forming his audience are running away in the foreground. The bald guy is possibly the politician and orator Robert G. Ingersoll “The Great Agnostic”. I am not sure who Irving is; he appears to be a 19th century English gentleman.

I is for Ibsen, reciting a play
While Irving and Ingersoll hasten away.

In letter ‘L’, Jean de La Fontaine author of the Fables, the Protestant theologian Martin Luther and the composer Franz Liszt are sitting at a round table upon which Loie Fuller is dancing. We can only see her legs and serpentine dress.

L is La Fontaine, who finds he’s unable
To interest Luther and Liszt to his fable,
While Loie continues to dance on the table. 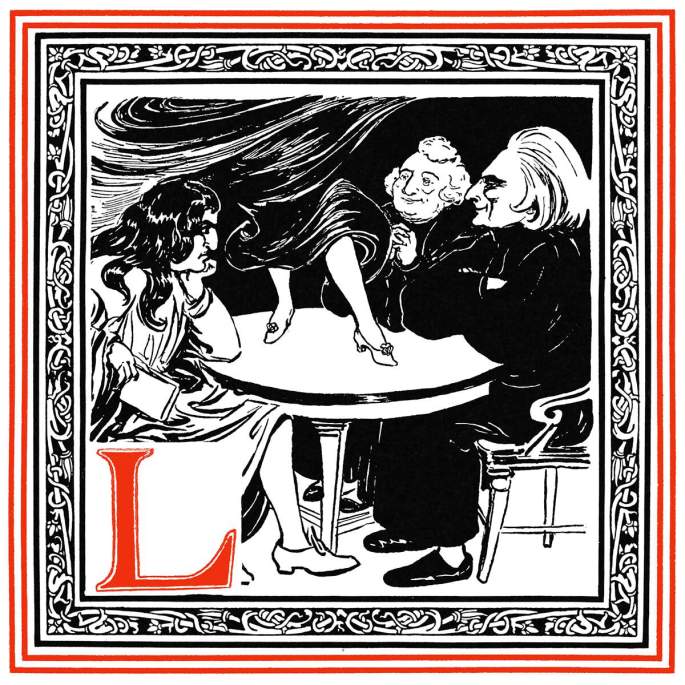 In the illustration to ‘M’, Manon, the lead in the opera of the same name, is in a large eighteenth-century hat and holding a crook. She stands amid three historical figures wearing a kilt like she does: Lord Macduff, a character in Shakespeare’s Macbeth, and, less believably, the English poet John Milton and the French essayist Michel de Montaigne.

M is Macduff, who’s prevailed upon Milton,
And Montaigne and Manon to each try a kilt on.

‘Q’ depicts a corpulent and hawk-nosed Queen Victoria standing at the top of a stairway. Her size and headdress leave no room for another luminary.

Q is the Queen, so noble and free. 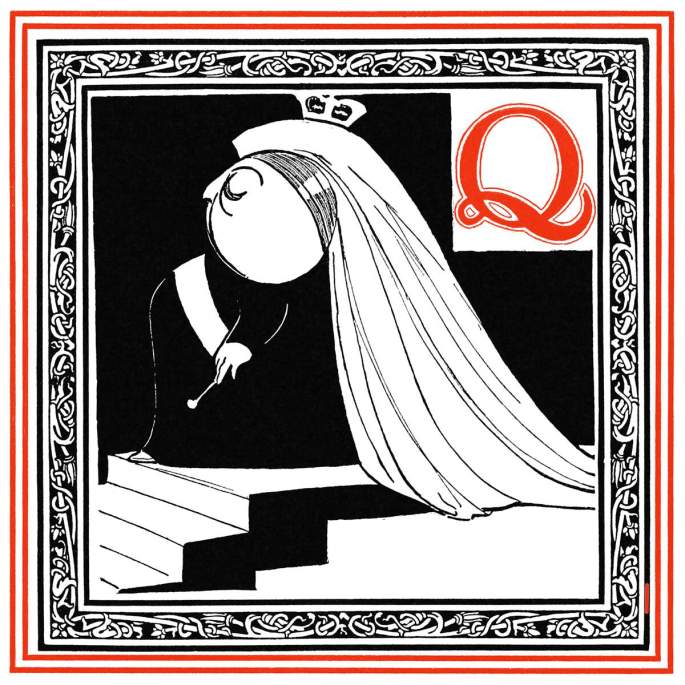 S is for Swinburne, who, seeking the true, the good, and the beautiful, visits the zoo,
Where he chances on Sappho and Mr. Sardou,
And Socrates, all with the same end in view. 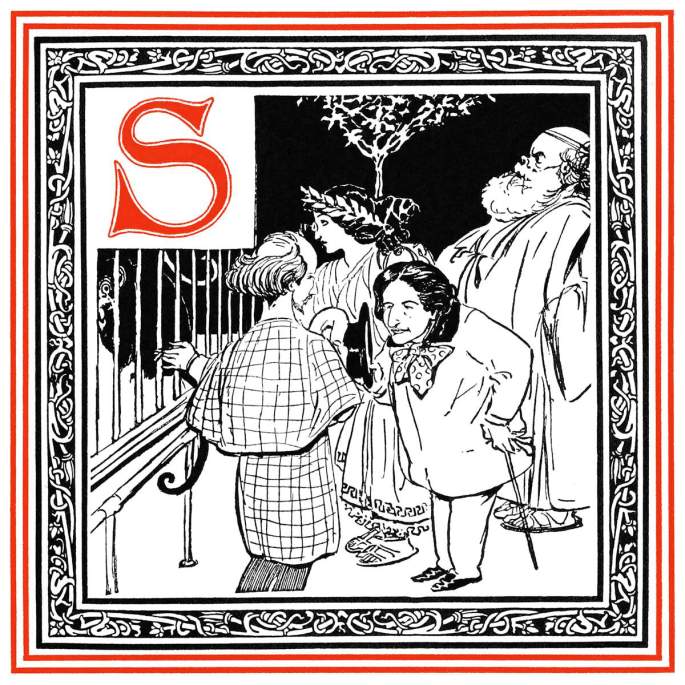 ‘T’ depicts Truth as a woman coming out of a well and greeted by two men (the French diplomat Charles Maurice Talleyrand and the American writer Mark Twain). Both men bow to her with glasses in their hands.

T is for Talleyrand toasting Miss Truth,
By the side of her well, in a glass of vermouth,
And presenting Mark Twain as the friend of his youth. 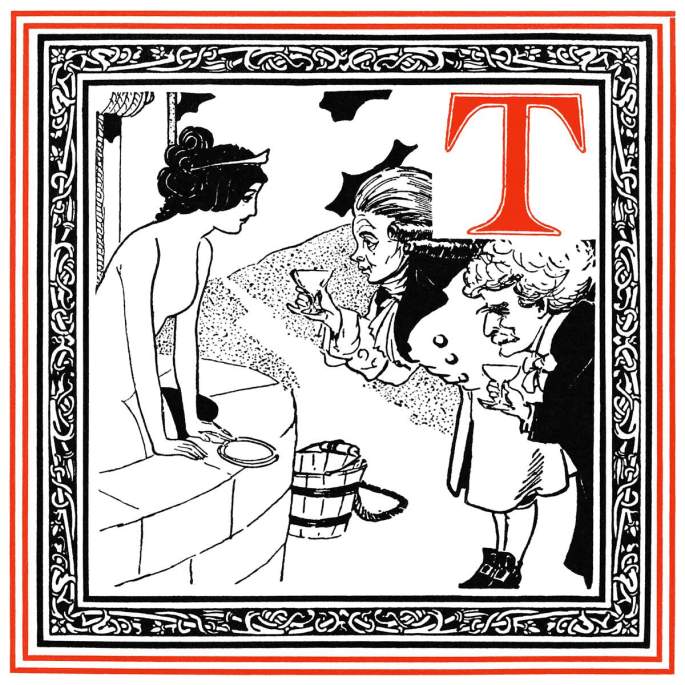 ‘U’ depicts a water nymph with long hair coming out of the water pursuing Ulysses and Umberto I of Italy who un-heroically run away on the sandy shore.

U is for Undine, pursuing Ulysses
And Umberto, who flee her damp, death-dealing kisses.

We want to hear what you think. Add a comment or leave a reply.

7 thoughts on “An Alphabet of Celebrities: ‘Knowledge Worth Having’”